Honesty may be the best policy, but it’s important to remember that apparently, by elimination, dishonesty is the second-best policy.

If it’s true that our species is alone in the universe, then I’d have to say that the universe aimed rather low and settled for very little.

No one knows what’s next, but everybody does it.

Just when I discovered the meaning of life, they changed it.

If you live long enough, sooner or later everybody you know has cancer.

As soon as someone is identified as an unsung hero, he no longer is.

The IQ and the life expectancy of the average American recently passed each other in opposite directions.

I knew a transsexual guy whose only ambition is to eat, drink, and be Mary.

I put a dollar in a change machine. Nothing changed.

By and large, language is a tool for concealing the truth.

Isn’t it a bit unnerving that doctors call what they do “practice”?

Eventually, alas, I realized the main purpose of buying cocaine is to run out of it. 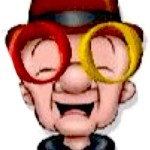 Im a blogger, but I guess you already know that. I also do ghost and comedy writing. Im the head comedy writer for a small cable network. In my spare time I preform stand-up and sketch comedy at every place you can imagine. Ive preformed at The Comedy Zone, The Comedy Box, Second City, Yuk Yuks, Radio City Music Hall, Absolute Comedy, The Laugh Factory, Chuckles, Roy Thompson Hall, Time to Laugh Comedy Club, Comedy Club Inc, Laff-A-Lot Comedy Inc, The Laugh Resort among others.
Now im consintrating on writing and doing graphic design, these are the things I’m pashinit about. I’m also an ordained minister and I use my birth name for that, Nielson Gnesin.
Im now starting this new venture and I can’t wait to get it up and running. This site is going to be the most fun you can have legally. I’m pulling out all the stops for this one and with your help together we can make this great. There are so many things coming down the Pyke that are so exciting but first I plan on spending all my time and effort on this site. If you have suggestions or any ideas to make this site better please let me know and we’ll work together on it. Peace and Love from the Psychedelic Relic.

1 thought on “So How’s Your Day Going”

You may have missed

So How’s Your Day Going

The paradox of our time

I am a modern man